Frédéric Bouché is a fourth-generation winemaker from France whose ancestors made wine in Bordeaux and Normandy. In May 2011, he opened Ports of New York—Ithaca’s first winery—where he makes and sells fortified wine. He put 600 miles on his bicycle last year hand-delivering his wine to local restaurants and shops.

EFL: What’s your earliest memory of being in your grandfather’s winery?

Frédéric Bouché: Being among barrels as a small child and watching spiders spin webs between the casks. My first work-related memory is sitting on a little stool and filling bottles. There was one hose that split into two faucets so you had to watch it very carefully. I was around 10 years old, too young to sip a bit off if a bottle got overfilled.

EFL: What does Ports of New York retain of your family traditions?

FB: The pace of being patient and waiting until the wine is ready, and the use of older tools. I use my great-grandfather’s copper and brass still to extract and measure alcohol content and residual sugar. I also have a small museum of old French winemaking equipment at the winery.

EFL: How do you describe your wine without calling it port?

FB: It’s fortified wine, which means a spirit is added to it to stop the fermentation in order to retain some of the sweetness of the grapes themselves. You can call it the “port method.” Some people find ports to be syrupy, too sweet and too high in alcohol. Mine are none of these.

EFL: Yet you use the word “port” on your bottle.

EFL: You call your fortified wine “Meleau.” What does this word mean?

FB: It’s a fanciful word that I made up. Mel is the Latin root of the word honey, and eau refers to spirit as in eau de vie. I developed a way of growing the yeast in honey—a natural preservative—a few weeks before starting the fermentation with the grapes. It’s very close to my childhood because my grandfather was also a beekeeper and made mead.

EFL: What is the solera system that you use to age your wine?

FB: My solera system will have four tiers of casks when it’s done. The lowest level contains all the oldest wines, which are now five years old. This is the mature wine that I draw to bottle, a maximum of 20%, and the gap is refilled by the younger wine in the row above. And that one is being refilled by the row above it, and the top row will contain the wine made this year.

EFL: Most people are familiar with red port, but you make a white fortified wine, too.

FB: The white is a lot less surprising in Europe. Ports of New York white is made with a very fragrant grape, Muscat Ottonel. It’s high in acidity, meaning it’s always fresh on the tongue even in summer when it’s very hot. It has 18% alcohol with 9% residual sugar, which is low for a port.

Our red is a lot bolder, much more typical of what people think a good port should be. It has a fair amount of black pepper because I use a Cabernet Franc and a little bit of Merlot to thicken the body. All of our grapes are grown in the Finger Lakes.

EFL: How did you choose your grape varietals?

FB: I did 57 fermentations with different types of grapes over the past 15 years. In the end what’s most important is that you have to like it. Taste is the ultimate judge.

Amelia Sauter was the co-owner of Felicia’s Atomic Lounge in Ithaca. She writes for several regional publications and blogs at drinkmywords.com.

1 thought on “Ports of New York” 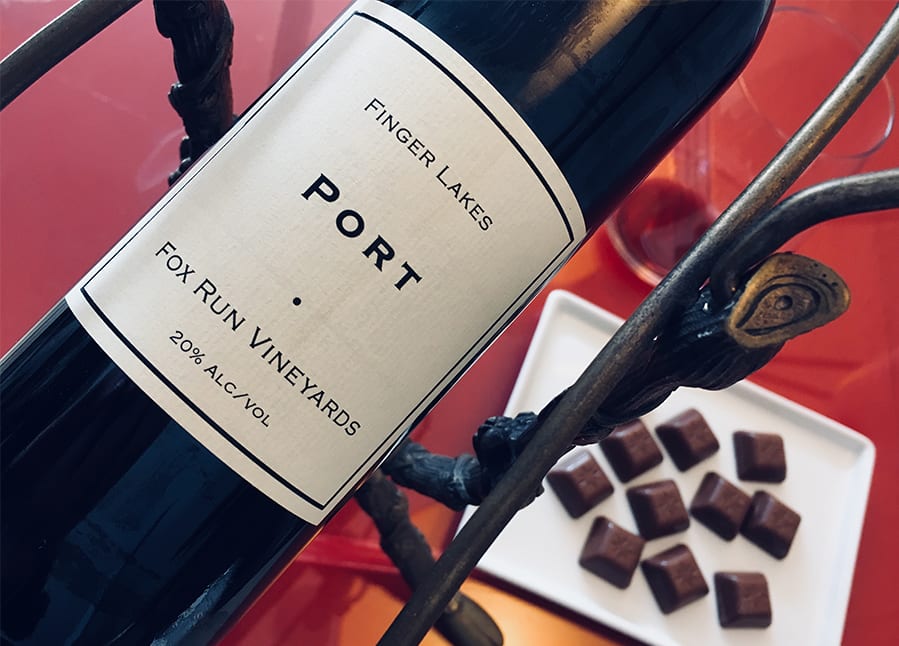