Shopping in the Finger Lakes

In terms of all things locally crafted and produced, the Finger Lakes region is truly a wellspring of abundance. A drive down Seneca or Cayuga Lake is a staggering tour of the many vineyards, farms, creameries and breweries that pepper the landscape—and that’s just the beginning. From cheese to wine, from sauces to spreads, there’s no shortage of culinary expertise available. But the aptitude in the region is equally bountiful when it comes to handcrafted wares. Through pottery, painting, fiber art and more, the artistic talents of craftspeople and artisans living in and around the Finger Lakes parallel the area’s collective culinary achievements. With so much aesthetic and edible goodness, the region is equally fortunate to have so many points of access on these levels for the public. There’s a growing emphasis among small businesses on supporting and featuring local producers, in some cases exclusively. Here we have a guided tour of 12 local shops where you can go to find creations by and learn more about our area’s makers.

One would be hard-pressed to find folks more passionate about local cheese than those at the quaint Little Bleu Cheese Shop in Rochester’s South Wedge neighborhood. “We really try to support the cheesemaker community—that’s our passion,” says owner Ann Duckett. Knowing the cheesemakers as well as their processes is a priority that Duckett and her staff take seriously, and their commitment to quality artisan and farmstead cheese is evident in the dizzying array of varieties available, sourced from more than 20 regional farms and creameries, including First Light Creamery in East Bethany and Vanillen Dairy in Ovid, among many others.

Sundrees, Trumansburg’s classiest boutique, is home to a diverse collection of attire, accessories, home decor, funky dishware and more, with local flare throughout. Renata Wadsworth’s earthy ceramics would brighten any table setting and the Buffalo-based “Vegetabowls” are a fun, whimsical example of food-meets-function. Locals can sport some hometown T-burg pride with T-shirts from new Interlaken graphic arts company Historical Wares or handmade bags produced by the shop’s owner, Diane Richard. The shop moved a few doors down into a bigger space on Main Street 3 years ago, which has allowed for an increased selection.

Geneva’s Red Jacket Orchards is arguably one of the most well known cornerstones of the Finger Lakes region when it comes to celebrating and promoting the area’s agricultural bounty. Major renovations completed to their Farm Store in 2013 have enabled the Red Jacket family to significantly expand their selection of local offerings. Visitors can sample a wide range of seasonal fruits and cold-pressed fruit juices, which Red Jacket is famous for state wide, and can also pair Red Jacket’s house jams and butters with a wide assortment of other local specialty food products produced in the Finger Lakes region.

Only at Finger Lakes Gifts and Lounge can one shop for both local food products and artistic creations while waiting for deliciously crafted milkshakes and sandwiches. The shop’s location in a historic 140-year-old building in downtown Geneva makes it prime spot for visitors and locals to grab a bite and a Finger lakes souvenir or gift en route to any of the area’s many vineyards. Their milkshakes, made with Ithaca’s Purity ice cream, are a favorite. The snack section of the menu represents an array of local producers, including a cheese plate with several of the area’s many local cheeses, as well as Geneva hometown favorite Normal bread toasted with Red Jacket Orchard jam or Once Again peanut butter.

“We take pride in welcoming people into our shop as if we’re welcoming them into our kitchen,” says Bet the Farm co-owner Kit Kalfs. Kalfs and his wife Nancy Tisch opened the winery and market in 2006, as one of the first enterprises in the area to focus solely on local products. They sell 4-6 different wines of their own, as well as a broad variety from other area wineries. “This enables us to really specialize and focus on the kinds that we really want to make,” Kalfs points out. Just a few of the gourmet specialty food products they carry include Skaneateles-based Ma Poole’s Chutney, started by a young man from England using his grandmother’s recipes to make red and green tomato chutney; Bee Attitudes Honey, also based in Skaneateles; and Flour City Pasta in Rochester.

For anyone seeking to expand their Finger Lakes wares repertoire beyond the region’s culinary offerings, look no further than Handwork, located on the Ithaca Commons since 1976. Started by 12 local artisans, the cooperative is now owned and staffed by more than 40 local makers, whose wares range from fiber arts to ceramics to leather goods, and more. The shop also regularly hosts artist demo nights, where folks can watch the artists’ processes in action.

3. The GlassMarket at the Corning Museum of Glass

Featuring the work of more than two dozen local glass artists, alongside the work of many others from all over the world, The GlassMarket at the Corning Museum of Glass has been providing museumgoers with a unique retail counterpart to the museum’s dazzling exhibits since 1981. The shop is in the midst of a redesign slated for completion in spring 2015, coinciding with the museum’s North Wing Addition, which will include a theater for live Hot Glass Show demonstrations.

Sunny Days of Ithaca opened in April 2014, with thoughtfully stocked shelves dedicated to encapsulating the “essence of Ithaca.” Owner Deirdre Kurzwell has taken great care to include a selection that represents the area’s artistic diversity and consumptive delights, with a focus on healthy ingredients at a reasonable price. Particularly popular sellers include local staples like Purity ice cream sandwiches, Ithaca Root and Ginger beer, and Chef Lerman’s line of sauces. “It’s a work in progress,” says Kurzwell, who hopes to continue to expand the food product selection. Kurzwell’s bigger vision is for the shop to function as sort of a culinary visitor center of sorts: A place to not only grab a local snack before hitting the area’s trails, but to learn more about just how much local food goodness is available.

As the downtown counterpart to Atwater Estate Vineyards, The Tasting Room in Watkins Glen has an inviting, modern vibe, and an unbeatable selection of New York state wines and hard ciders. Tastings and flights are offered at the bar, as well as a local cheese plate featuring an array of local cheeses. The wines they serve and sell come not only from Atwater, but from all around the state’s winemaking regions. “We try not to carry anything that’s not produced in-state,” says manager Wesley Labdell. One notable wine is Atwater Bubble: a carbonated take on Riesling that has been gaining traction among consumers.

F. Oliver’s is a premier destination for oils and vinegars in the Finger Lakes, and with shops in Canandaigua, Ithaca and Rochester, also one of the most accessible. Their products, crafted in small batches, range from traditional extra virgin olive oil and balsamic vinegars to unique, deeply flavorful varieties like Blood Orange extra virgin olive oil and Honeyed Ginger balsamic vinegar. They also have several Finger Lakes specialties, including Squash Seed oil and their Good-for-You Grape Seed oil, pressed from locally grown squashes and the grape seeds of area wineries.

Bostrom Farms is the newest retail destination in the Finger Lakes for local carnivores. Partners Kevin Bostrom, Kate Bostrom,and Ben Wickham have been selling their all-natural meat to restaurants for the last two years, and in July 2014, the trio expanded the operation to include retail space in Stanley. Their freshest cuts of beef and pork, plus sausage and bacon, are now featured in the shop’s meat case seven days a week. The increased space and mercantile opportunities have also enabled them to increase their own production to include meat rubs and seasonings, which are available now in the shop. Wickham says that he hopes to keep the momentum going by experimenting with house-made barbeque sauce. They’re also excited to include offerings from other area retailers, including Stoney Ridge Maple products and Red Jacket Orchard jams.

During several decades of running the Naples Grape Festival, Suzanne Farley noticed that the area’s many talented artists needed a more permanent outlet for their wares. Cue Artizann’s, which she opened as a year-round destination for locally crafted goods. Ten years later, this cozy gallery and shop in downtown Naples carries the work of more than 200 local artists, as well as a well-stocked selection of local culinary products. Local favorites include Maggie’s Mustards, made in Bristol, and Seneca Culinary Salt Flakes, produced by Keuka Lake Coffee Roasters. The Arbor Hill products, which include jellies, sauces, their famous grape twists and a to-die-for Cabernet Sauvignon chocolate sauce, are also popular mainstays. The combination of art and food makes a perfect destination for a regionally focused wedding or holiday gift, Farley points out—for instance, guests can stop in and get maple syrup made right in Naples, accompanied by a hand-crafted pitcher.

18 North Main Street, Naples
585.374.6740
artizanns.com
Lisa Barker is a photographer, writer and youth programming specialist living in Rochester. She is also the co-founder of Seedfolk City Farm, a multi-campus urban farming operation.
This piece originally ran in our November/December 2014 issue. 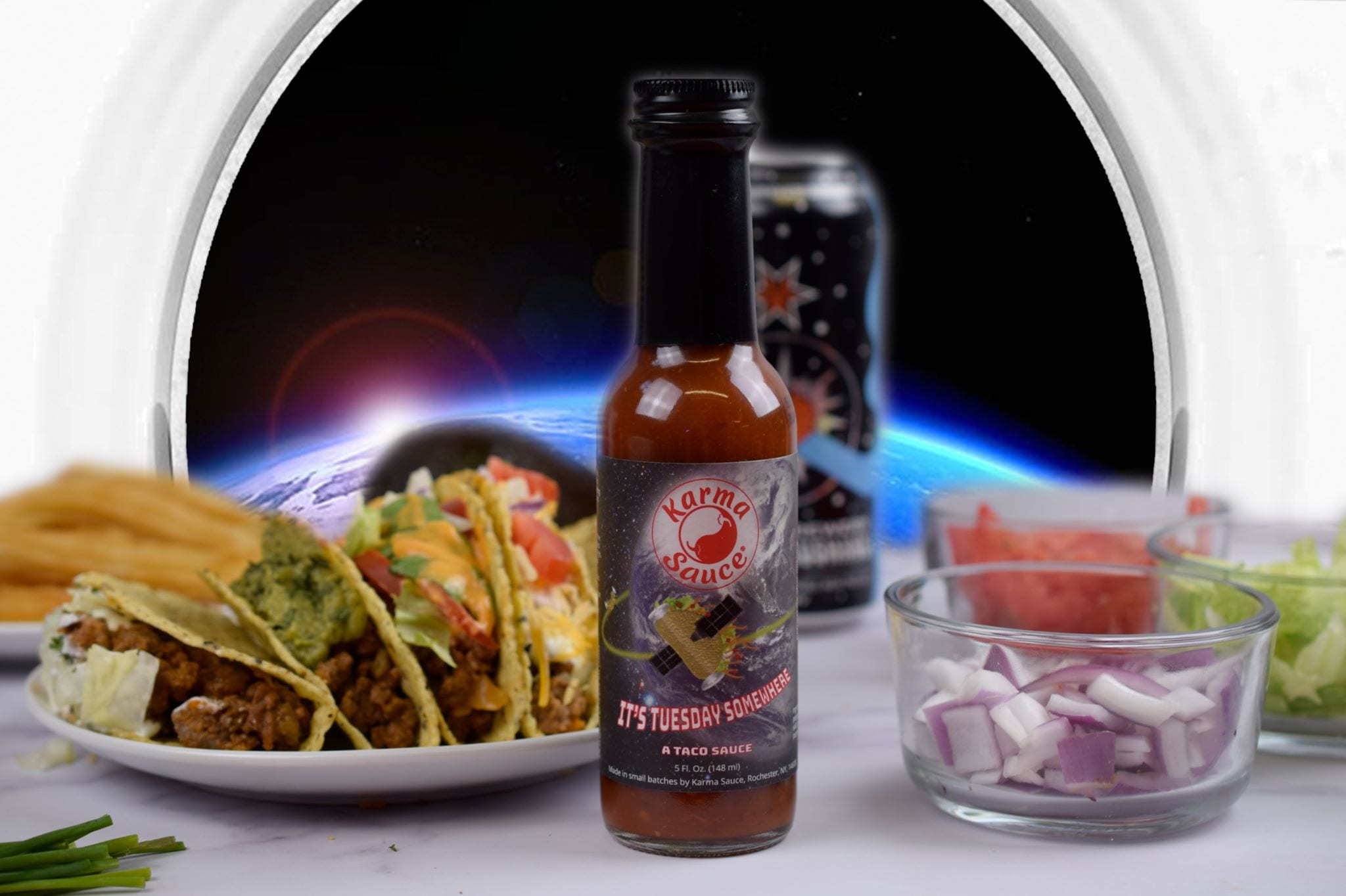 Made in the FLX: ‘It’s Tuesday Somewhere’ Karma Sauce 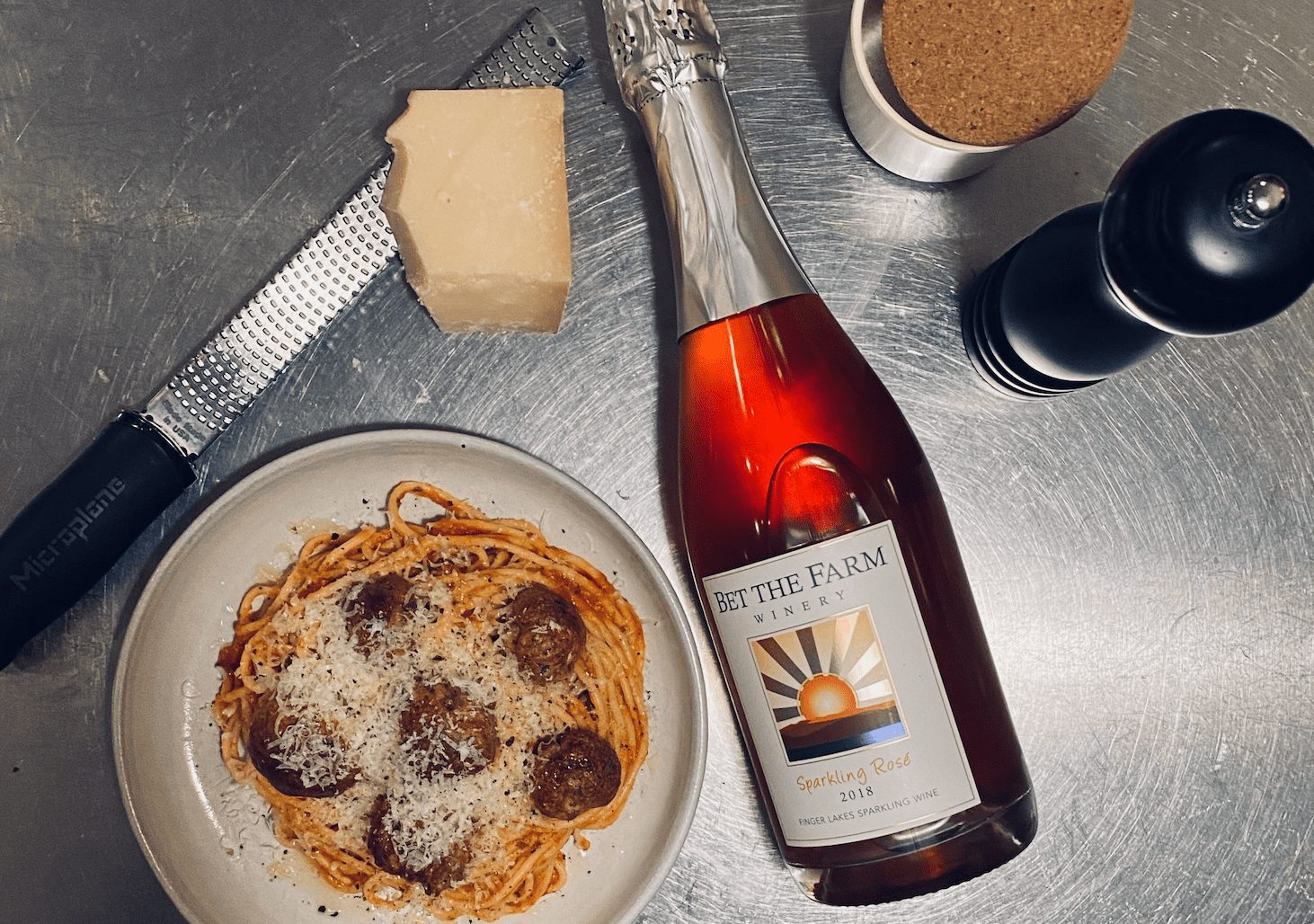