Schumer spoke for ten minutes about his push to back the industry’s request to fully fund TTB this fiscal year with an additional $10M budget increase and highlight examples of how delays have cost industry and are hindering growth of craft distilling/brewing/wine. He noted that businesses like Black Button Distilling are a “source of local jobs and urban revitalization efforts,” and that the craft beverage industry “pours local jobs into the economy.”

Schumer says cuts in federal alcohol inspectors put Rochester and other NY distilleries directly at risk; delays cause losses to producers trying to get off the ground or expand. Inspectors are responsible for auditing and reviewing all requests like bond approvals, new product labels, recipes and operating licenses; it is very common for some approvals to be delayed up to hundreds of days. 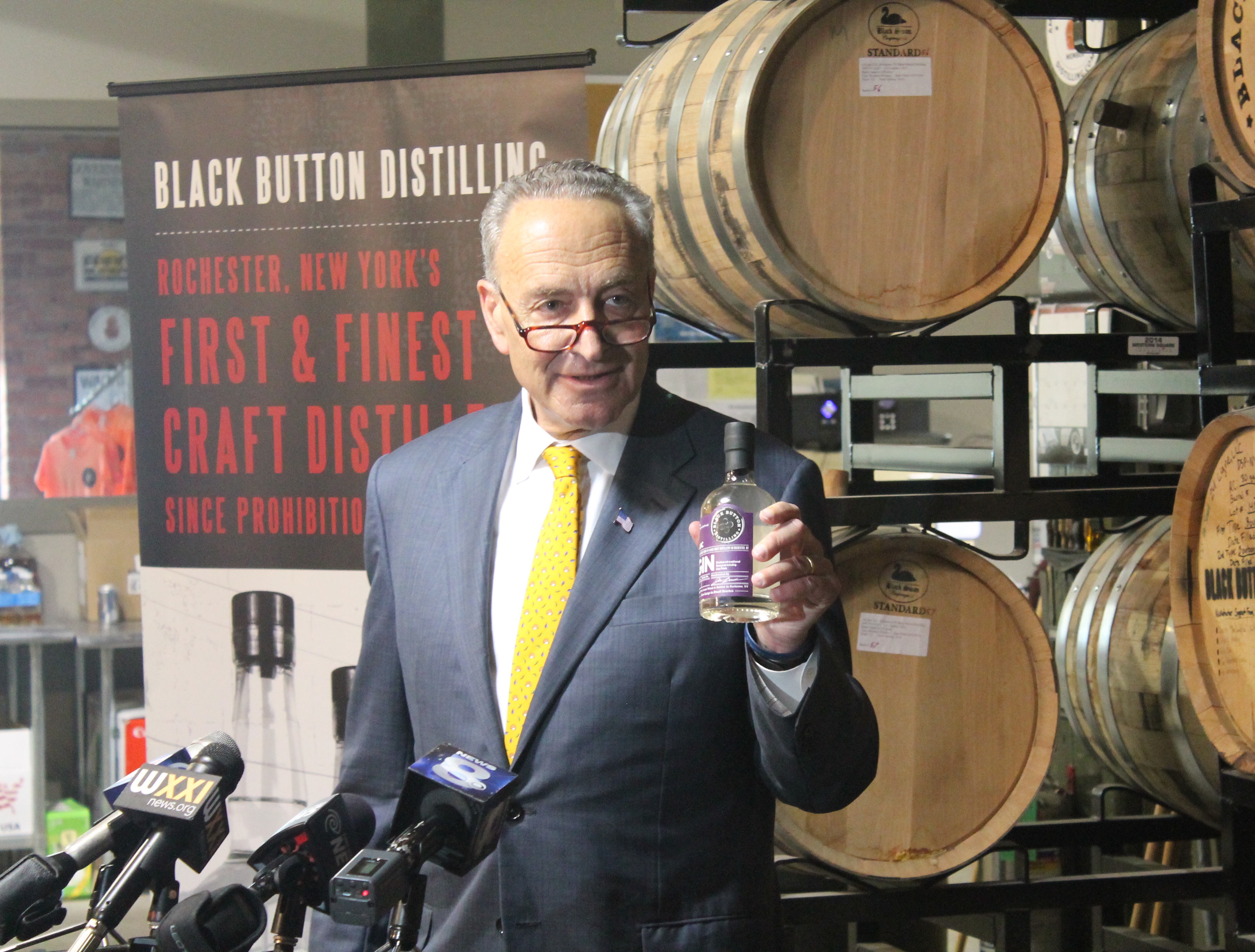 Jason Barrett, Owner and Head Distiller of Black Button Distilling said, “TTB delays are significantly inhibiting our ability to grow the overall craft distilling, beer, and wine industry as well as our specific business.  We are at a critical point in our company life cycle and currently do not have the space to grow. For months we have been awaiting TTB approval to expand with an additional warehouse to age our bourbon and make room to install new production equipment that has already been bought but cannot be shipped until we have space to put it.  This is a top priority for us and while we operate in full compliance with TTB regulations it is frustrating when nine months can pass between when you start seeking new approvals and when you hear back because TTB is stretched too thin. I appreciate Senator Schumer’s support of the wine and craft alcohol’s industry’s call to fully fund the TTB to reduce lengthy approval delays, bring in more tax revenue for the treasury, and better safeguard consumers from fraudulent or damaging alcohol claims.”

Here is the request made by the 12 industry associations that Senator Schumer is pushing for:

On March 23rd, the beverage alcohol industry sent a joint industry letter to the House and Senate Appropriations Committees requesting a funding increase for the TTB for FY2016. The letter was signed by twelve leading associations representing wine, beer, and spirits producers and wholesalers.  The letter asks that the Administration’s request in last month’s budget be viewed as a minimum starting point for TTB funding and that TTB’s direct appropriation be increased above the Administration’s request by $5 million in a direct appropriation line item for enforcement of the Federal Alcohol Administration (FAA) Act.  The letters were signed by:  WineAmerica, American Beverage Licensees, American Distilling Institute, Brewers Association, Beer Institute, Distilled Spirits Council of the United States, National Association of Beverage Importers, National Beer Wholesalers Association, The Presidents’ Forum of the Distilled Spirits Industry, Wine Institute, Wine & Spirits Wholesalers of America, Washington Wine Institute

On behalf of the trade associations representing distilled spirits, beer and wine, we are writing to request Congress to fully fund the Administration’s budget request for the Alcohol and Tobacco Tax and Trade Bureau (TTB) for FY2016. The Administration has requested $101 million for all TTB operations. Full funding is vital to the TTB and the industries the agency regulates. The Administration’s request should be viewed as a minimum starting point for TTB funding. We respectfully request that TTB’s direct appropriation be increased above the Administration’s request by $5 million in a direct appropriation line item for enforcement of the Federal Alcohol Administration (FAA) Act. Appropriate funding will ensure that TTB can maintain the personnel necessary to conduct its responsibilities as the nation’s primary federal alcohol regulator. TTB has long endured a shrinking full‐time equivalent (FTE) workforce despite a marked increase in the number of licensed manufacturers and wholesalers. Since 2007, TTB’s workforce has shrunk by 10% ‐ losing more than 50 full‐time positions – resulting in a direct, negative impact on the businesses that depend on it to operate and grow. We further request that Congress appropriate all funds as direct funds to the TTB, rather than any portion in “program integrity funds,” which we fear will not be available to TTB. TTB is best suited to allocate all of its funds in the most effective and efficient manner. The agency’s ability to respond swiftly and properly to changes in the alcohol industry has a direct impact on jobs, consumer protection, the innovation of new products and the collection of federal excise taxes. The Business Insider claimed in 2012, that “the TTB is the government’s third‐biggest revenue collector, after the IRS and Customs and Border Protection.” The TTB is also the government’s most efficient tax collection agency. In FY2013, the TTB took in $23 billion. That amounts to $457 for every dollar the agency spent collecting taxes, more than twice the Internal Revenue Service’s ratio. No other federal agency does so much for so little, while also having a huge impact on the industry it regulates. In addition to its tax collection role, TTB is responsible for enforcing the FAA Act, including its provisions to preclude unfair trade practices. TTB ensures industry integrity through a comprehensive system of licensing and background checks. Agency officials review well over 100,000 labels and thousands of formulas each year to protect U.S. consumers from counterfeits and unsafe products. Adequate TTB funding will ensure a timely process for the review of label requests, helping expedite new products to market in today’s highly competitive, global marketplace. We also need a well-funded TTB to prevent and guard against unscrupulous actors from entering the marketplace and putting American consumers at risk of consuming dangerous counterfeit products, a scenario all too familiar in nearly every country outside of the United States. TTB also advises other agencies on a range of trade issues as a significant volume of U.S. alcohol beverages are exported annually and hundreds of brands enter the U.S. annually. The U.S. government has a clear economic interest in a well-funded and well-run TTB. According to industry data, beverage alcohol suppliers, importers, wholesalers and retailers contributed over $416 billion in total U.S. economic activity in 2011. In the same time period, the industry generated over $92.9 billion in wages and over 4 million jobs for U.S. workers. In recent years, the alcohol beverage industry has seen explosive growth across the United States, and the number of businesses that the TTB regulates has skyrocketed. These businesses, many of which are small, family‐owned operations, have been forced to deal with longer and longer wait times for critical label, formula and permit approvals. Since 2007, the number of wineries, breweries and distilleries in the country has grown by an astounding 53.1%. Rising costs in areas such as payroll, office infrastructure, information technology and travel have left TTB with no other alternative than to reduce its staffing numbers to cope with its shrinking budget in real dollar terms. In short, now is not the time to cut funding to one of the few federal agencies that is performing well and actually helping a significant U.S. industry grow. The licensed beverage industry absolutely needs a well-funded TTB, and we urge you to fully fund $101 million in direct, no strings attached, funding and include an additional $5 million line item for FAA enforcement activities in FY2016. Thank you for your consideration of this important matter and please do not hesitate to reach out to us if you have any questions regarding our request.