Her-story on the Menu: Cafe 19

As an 8-year-old, Casey Galloway loved helping her mom in the kitchen and hearing stories about her mother, a restaurant owner in the 1930s and ’40s.

As an 8-year-old, Casey Galloway loved helping her mom in the kitchen and hearing stories about her mother, a restaurant owner in the 1930s and ’40s.

“I’ve always felt a sense of pride knowing my grandmother had owned a restaurant and, with no help from her husband, did all the baking and everything else,” Galloway said. “This was at a time when women didn’t have the rights or liberties we have. But she raised three children and was passionate about cooking her restaurant’s food. She had a huge influence on me.”

Today, it’s Galloway who owns a restaurant, Café 19 in Seneca Falls. It opened in December 2013 as Café XIX, but too many people mistook it for just a series of letters, so Galloway began transitioning to the more familiar 19.

“Most people don’t know how to read Roman numerals, and I really wanted people to be able to say the name and know the meaning,” Galloway said. That meaning—the 19th amendment granted women the right to vote—breathes life into the café, much like its dispensers of Finger Lakes and Cobblestone coffees, local fruits and veggies and Finger Lakes Farms eggs. Together, they contribute to a menu packed with freshly roasted beef, Cajun turkey BLTs, sriracha black bean burgers, veggie breakfast burritos, blueberry and almond oatmeal, War Horse handcrafted sodas and warm, melt-in-your-mouth cinnamon buns.

Because Seneca Falls is the birthplace of women’s rights, Galloway wanted to open a café that celebrates that. Embracing the theme came naturally since the café is woman-owned and-operated.

Now in its fifth full year, Café 19 has survived the nascent period that’s broken many a small startup. Quick to acknowledge the local support the business enjoys, Galloway also knows that her experience helps. She owned Zuzu Café on Fall Street, was sous chef at The Inns of Aurora for nine years, worked at the former MacKenzie-Childs restaurant and Dory’s Bakery, and ran the Wells College dining hall, all in Aurora.

A robust resume, for sure, but her professional endeavors and Paul Smith’s College degree grew from seeds planted at home.

That, and working with chefs, men and women, who were eager to teach her, has helped Galloway avoid some of the sexism of her grandmother’s era and beyond. One mentor, Sue Edinger, general manager of The Inns of Aurora, encouraged some of Galloway’s choices, including her decision to open Zuzu.

In 2012, Generations Bank President Menzo Case approached Galloway about opening a café next to the bank’s headquarters.

Galloway liked that it would mean returning to comfort food and pursuing her baking passion while also creating savory dishes, such as soups, guacamole toast with feta and pickled red onions and Cubans with pickled pineapple.

The switch to Café 19 also enables her to work where she and her husband, Chris, are raising their daughter, Rylee, and focus on some core philosophies: treating her staff of nine the way she wants them to treat customers and respecting her own belief that food is not just sustenance.

“From a mother’s perspective, it’s something that nourishes your soul,” she said. “I think that, inherently, I just want to feed people.”

Anne Schühle is a freelance writer who lives in Geneva.

Jan Regan is a longtime Geneva-based photographer happiest when capturing people, places and things of the Finger Lakes and beyond. Find more of her work at janreganphotography.com. 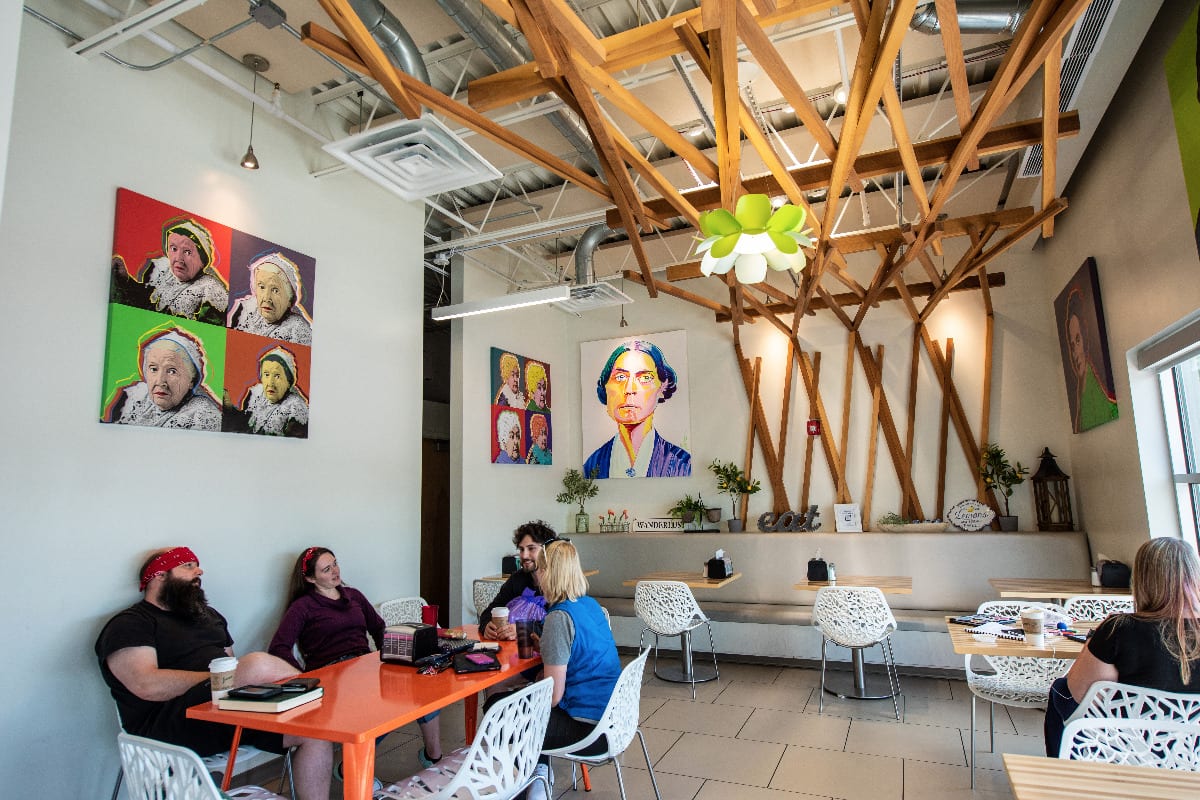 Her-story on the Menu: Cafe 19